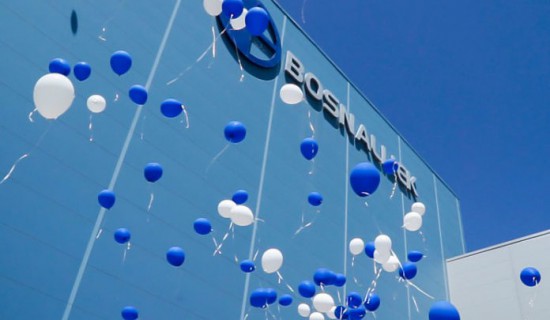 Bosnalijek's medicine "Lysobact" won the first place in the category of "painkillers" with the largest sales in Russia, and the awarding of the "Consumer Health Choice Awards 2017" was held on September 19 in Moscow.

More than 500 representatives of the leading pharmaceutical companies attended.

Under the auspices of QuintilesIMS, an American multinational company providing services to the mixed industries of health information technologies and clinical research, the Consumer Health Choice Award is a direct evidence of success in the Russian pharmaceutical market. By evaluating sales results over a period of 12 months from a wide range of retail chains, QuintilesIMS provides an objective picture of the marketing strategy and communication effectiveness, and in general the operations of a pharmaceutical company.

"Lysobact" is an unique product that contains natural antiseptic lysozyme without substances that are foreign to the body. Given the spectrum of antiseptic activity of lysozyms, "Lysobact" eliminates the causes of sore throats - viruses, bacteria and fungi. As the best quality Bosnalijek product with modern quality control, "Lysobact" has set a standard for painkillers containing lysozyme.

- We are very happy to have won this prestigious award - said Valentina Buchneva, director of the Bosnalijek Eurasian Department.

She added that "Lysobact", which was first registered in the USSR in 1982, became popular because of its unique advantages, which are natural security and a spectrum of antiseptic effects. In fact, "Lysobact" is a unique drug of pain medications on the Russian market that contains lysozyme and does not contain "chemical" antiseptics. This fact makes Lysobact an optimum choice not only for adults but also for sensitive consumer categories, such as children, pregnant women and nursing women.

This award has become another significant achievement of Bosnalijek in 2017. The company received GMP certification in March 2017, which was issued by the Ministry of Industry and Trade of the Russian Federation, becoming one of the first companies operating in Russia with an European production site, which passed the Russian GMP inspection, Bosnalijek said.